I love to read!

Hillbilly Elegy: A Memoir of a Family and Culture in Crisis
J.E. Vance

This is one of my favorite books.  I loved it, although the ending was a bit weird. This book was interesting enough to finish, but I didn't like the ending. This book was interesting enough to finish, and had a couple of exciting surprises, but it didn't hit the spot for me.

I'm reading this now.  I relate to the author's story since my extended family is from the Appalachians.

Reblogged from Sabbie Dare and Friends: Bram Stoker's Dracula
I was holidaying in Whitby when I first realised that Bram Stoker’s Dracula was a surprisingly modern novel. I’d watched the Hammer film versions of the book in my misspent youth and they left with the opinion that the book was a bit of late Victorian gothic horror, no where near good enough for me to need to wade through all that gore. But every Whitby bookshop had a copy of Dracula in its window, and naturally, I soon succumbed, reading it on the top of blowy cliffs and in the shelter of the beaches below. I took it on every walk, along with my butterfly identification book. 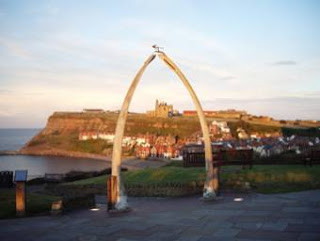 We did a lot of walking that holiday, passing the whaling arch on West Cliff, which Stoker would have passed too, with his family, when he holidayed here in June 1990. He stayed at Royal Crescent and it was there I discovered just how inspiring his time in Whitby must have been. Bram Stoker had found his inspiration. Standing in the crescent, you have a view of the North Sea, past sloping green cliff and grey sands. Across the river estuary are the imposing ruins of the Abbey, which must have been at least as gothic then as it is now.  The churchyard of St Mary lies below, the location of a vampiric attack in the second half of the story. As twilight falls, bats begin to swoop into view.
Mina, one of the two young female characters in Dracula, voices Stoker’s thoughts on the town: Right over the town is the ruin of Whitby Abbey, which was sacked by the Danes, and which is the scene of part of "Marmion," where the girl was built up in the wall. It is a most noble ruin, of immense size, and full of beautiful and romantic bits; there is a legend that a white lady is seen in one of the windows… 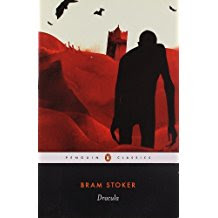 Bram Stoker also spent time at Whitby library – he made notes from 'An Account of the Principalities of Wallachia and Moldavia’, in which he must have seen the name ‘Dracula’ for the first time. The fifteenth-century Vlad Dracula (Vlad the Impaler) was as bloodthirsty as his fictional counterpart, impaling his enemies on long spikes and nailing turbans to the scalps of foreign ambassadors. Stoker gives his reader the historical allusion that Count Dracula is the descendant of Vlad – in his Author’s Note he explains that the documents assembled in the novel are real. Even as I read this, before starting the novel, I was reminded of the hype around The Blair Witch Project, and saw how astute Stoker was as a writer.
He’d called this story The Un-dead for all the time he was writing it. Just before publication, he changed his title to  the wonderfully charged-up name of the antagonis. This  may have changed its destiny, although ‘un-dead’ remains a popular trope today, especially in Young Adult literature.
I began my holiday read, and soon found that it was not at all like the Hammer Horror version…or for that matter like Bram Stoker’s Dracula (1992) which I found almost unwatchably hammed up. Dracula contains elements of the conventions of gothic fiction…dark-shadowed, cobwebby castles juxtaposed with vast remote landscapes and vulnerable, virginal girls threatened by black-coated evil-doers… but Stoker contrasts his Transylvanian castle with parochial Whitby and the bustle of London in the 1990s.
Starting with that holiday in Whitby, Stoker used a wide range of research methods and a clear understanding of modern character development to write the story, but a stuck with the traditional gothic novel structure; diary entries, letters and newspaper cuttings etc. It opens with the most famous section of the book, Jonathan Harker's Journal, which recounts his visit to Transylvania as a lawyer helping the count through his London property transaction. Harker falls under the spell of the Brides of Dracula and succumbs to the vampire’s influence. This opening feels like it has an impossible resolution and I turned the pages as fast as any modern thriller, needing to know how he could possibly escape with his life. At that point, I had no idea how many other characters would not escape with theirs. The novel keeps twisting and surprising us, as Dracula, on his way to London aboard a ship (hidden in a coffin) is washed up in Whitby and escapes in the shape of a black dog, and we’re introduced to Renfield, who is incarcerated in  a mental asylum where he lives on a diet of flies and spiders. 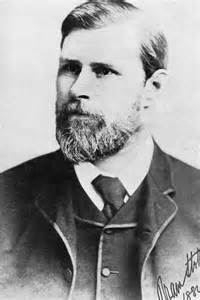 Stoker's masterpiece was part of a fin-de-siècle literary culture obsessed with crime – this was the time that Jack the Ripper stalked Whitechapel – and sensationalism – these were the original ‘naughties’. The book strips away the layers of late Victorian anxiety such as loss of religious traditions,  colonialism, scientific advancement, plus a growing awareness of female sexuality and a continued fear of homosexuality.  The book is a mirror in which generations of readers have explored their own fantasies.
Maurice Richardson described it as; a kind of incestuous, necrophilious, oral-anal-sadistic all-in wrestling match, and no one could argue with that (or prevent themselves from rushing to read such a book).
You can read Dracula for free online here.
classics all time favourites
Tweet